The general concept of the IoT was first discussed in the early 90s. By the end of that decade, experts in the IT world started talking about device-to-device interaction, and the term IoT came into existence.

The IoT is a concept that describes the interconnectivity between devices and the internet.

The latter is one of the prime challenges for IT, today, as interrogation and manipulation of big data requires a framework and systematic approach to optimise automated processes for actionable decision-making. 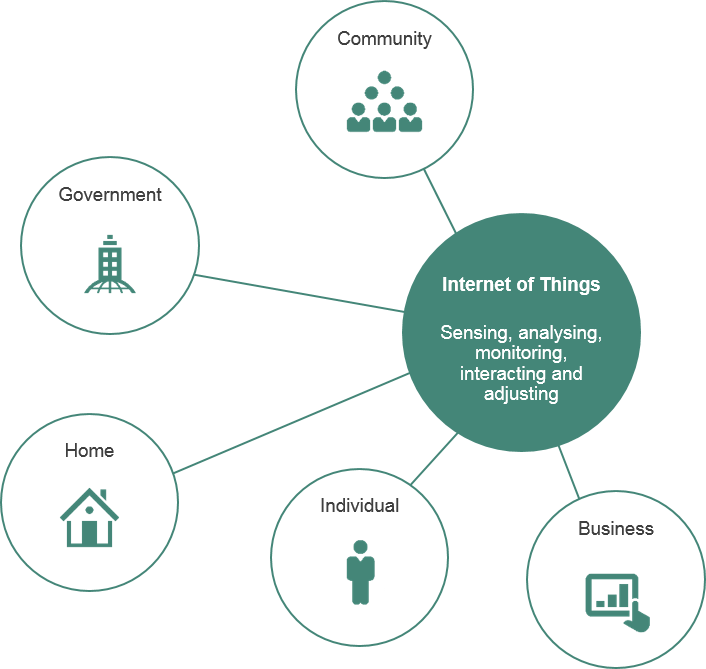 End users’ connectivity to the IoT

The IoT can be used for:

Of these, two have considerable focus in big industries across the globe: building automation and energy management. During the last twelve months, these applications have gained momentum and key industries have initiated projects related to them.

The big players have set targets for using this ‘silent intelligence’ (as the IoT is also referred to, these days) in smart buildings like airports, hotels, residential high rises and offices.

Building management systems predominately monitor mechanical and electrical services in buildings and alert building managers of any irregularities within the system based on predefined parameters. In essence, any modification required is manual and quite onerous. The IoT enables the full integration of all building services which traditionally operated in isolation. It will revolutionise occupants’ experience beyond imagination. Not to mention significantly reducing hefty energy bills.

What’s on the internet horizon?

Organisations want to drive operational and business excellence, with quicker time to market for their products, by leveraging network connectivity and automation.

This means demand for connecting devices to the internet is rising — and it doubles every year.

The internet already connects between 10 and 15 billion devices, according to Industrial IP Advantage.

It’s anticipated that by 2020 approximately 50 billion devices will be connected to the internet.

As these connected devices enhance processing power and add capabilities like context awareness, the Internet of Everything (IoE) — a network of networks, where billions to trillions of connections will create unprecedented opportunities — becomes more apparent.

What do we ultimately achieve by connecting all these devices?

Well, the sky’s the limit.

Here are some examples of the countless benefits:

1. Significant improvement to the productivity of operational procedures without human interaction

This can be as simple as taking advantage of higher levels of computing performance, and searching and analysing information in a very short period of time. Not to mention improved mean time between failures and mean time to repair, which reduce downtime. A productive system with predefined parameters detects irregularities in operation in advance and sends alerts to operators. Hence, the human factor for regular inspections becomes less relevant.

The IoT can be used for the process by which data collected is stored and used intelligently for smart monitoring and actuation. This can be achieved by developing an artificial intelligence algorithm to make sense of the data collected by different systems. This algorithm manifests characteristics such as interoperability, integration and adaptive communications between systems.

A good example of this is in the control of traffic flow, making adjustments to traffic lights and timing of road crossings based on environmental conditions and the impact of traffic movement in other roads downstream to road crossings.

By integrating the sensors for major building services — such as lighting, drainage, and the heating, ventilating and air-conditioning system — a modern management system will contribute to dynamically adjusting criteria such as temperature, lux levels and water flow rate. When interfaced with an artificial intelligence algorithm, such a system will be able to predict the demand and dynamically adjust the input based on real-time data captured by sensors.

Are there any downsides of the IoT we should be worried about?

As mentioned by Schumpeter in 2010, the loss of jobs is seen as a key implication of the IoT. This is due to its full automation of processes and the fact that it relies less on humans, especially for less-strenuous tasks.

These changes have become apparent in big supermarkets, in unmanned petrol stations in Nordic countries, and in the form of money and food dispensers like ATMs and vending machines.

Once information is on the internet, it’s always available. This leads to potential breaches of privacy and security, which is another downside of the IoT.

Something that needs to be considered, at a very early stage, is what security measures to put in place to minimise the risks, especially from network intruders such as hackers who have the ability to access the system and cause serious financial or environmental damage.

The introduction of tighter legislation by governments is another way of ensuring the privacy and security of information for organisations and end users.

Another downside to the IoT is the world’s excessive dependence on technology.

The current generation has grown up with easy access to the internet and technology.

However, we’ve become too reliant on technology, even for performing basic tasks, and for making decisions based on the information it provides.

No system is robust and bug-free. There are glitches that occur in technology, in particular when the internet is involved.

Depending on the amount of information that an individual relies on, the implications could be drastic, should the system collapse.

The IoT’s benefits outweigh its downsides

With the increase of connected devices and the automation of most everyday processes in business and everyday life, the IoT’s evolution and integration is inevitable.

Although there are concerns in relation to loss of jobs, the security of information and excessive dependence on technology, the advantages of the IoT outweigh the concerns.

This requires a framework in organisations to address all such concerns and alleviate risks, while still taking advantage of the benefits of the IoT.